Boggsville’s hours are from 11am to 3pm Tuesday through Saturday. Contact 456-1358 for any special arrangements.

AND REMEMBER TO SIGN-IN AND DONATE TO THE TOUR. 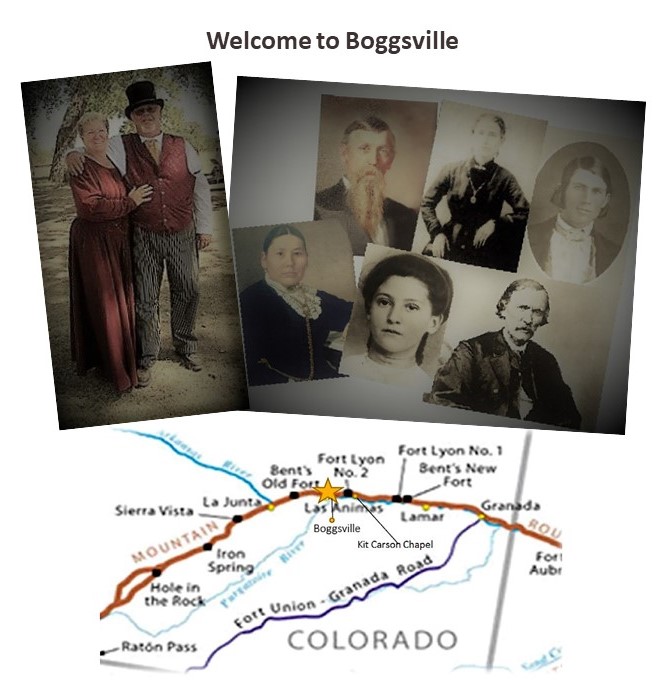 150 YEARS OF HISTORY Boggsville played an important, and brief, role in the development of Southeast Colorado. The settlement's local and regional historic value was recognized by its inclusion on the National Register of Historic Places, as an early Colorado agricultural and trade center, and is also a certified site on the Santa Fe National Historic Trail. Boggsville was established in 1866, but the history of its location has been written about numerous times prior to Thomas Boggs settling here. Zebulon Pike made entries in his diary on November 15, 1806 about camping on the banks of the Purgatoire some two miles south of the Arkansas River. Major Long reported camping in the valley of lost souls in Purgatoire in1820. The trader and explorer Jacob Fowler camped at the mouth of the Purgatoire on November 13, 1821 and recorded that the Kiowa's were established in the area. Early explorers enjoyed the native beauty of the valley, as it provided food and shelter for them, and a place to rest their horses so as to regain their strength on the rich grasses. Thomas Boggs first came to the region in 1840, and worked at Bent's Old Fort for about 6 years as a trader. During this period he learned to speak the languages of 11 Indians tribes, and Spanish. He was considered by William Bent as the most useful and trustworthy of plainsman of the time. In 1858 Thomas was employed by Lucien B. Maxwell in Cimarron, New Mexico. It was around this time that he brought some sheep and cattle to the Purgatoire River in the spring and summer time. Recognizing that the area was ripe for ranching he acquired land from Vigil & St. Vrain/Las Animas Mexican land grant by way of his wife Rumalda, and they built a ...
Read More

Come Take a Tour of The Bent County/Las Animas Cemetery

See Where a Few Famous Pioneers Are Laid To Rest.