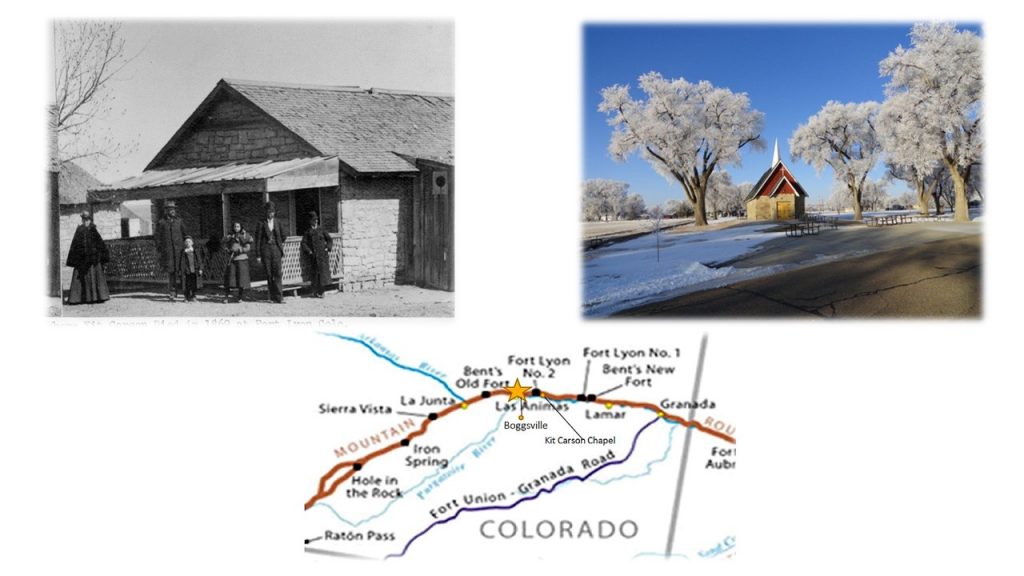 Turn south on Colorado Highway #183 and enter through the Fort Lyon Gate where the Chapel stands proudly as the gateway to Fort Lyon National Cemetery.
The Chapel is available for weddings and funerals.
Kit Carson died in Surgeon General Tilton’s Quarters on May 23, 1868. The Surgeon General’s Quarters originally stood on the east side of the Fort Lyon Parade Square behind Building 5. After many years of disrepair, the Veterans Administration took the rocks from the quarters and made a building out of the rocks. The building was a Museum for a few years, then was eventually turned into the Kit Carson Chapel. Many weddings and funerals were held there.
Fort Lyon is named after Brigadier General Nathanial Lyon, who was killed at the Battle of Wilson Creek in Missouri in 1861 during the Civil War.
Established as a U. S. Army outpost in the 1860’s, the Fort has a long and colorful history. Fort Lyon was signed over to the State of Colorado in 2000 and part of the agreement between the VA and the State was to move the Kit Carson Chapel to a more accessible area at the junction of Gate Road and Cemetery Road.
During Fort Lyon’s tenancy as a Colorado State Prison, visitor access to the Chapel was greatly reduced and the Chapel sat in disrepair for many years. Thanks to local persistence and Senator Ken Kester’s help, money was designated to renovate the Chapel and in 2007, the Chapel reopened. The stained-glass windows were refurbished in Denver; the flooring was added by the Department of Corrections with prison labor; and the seats were retrieved from storage in one of the barns after the asbestos was removed.
In 2013 Fort Lyon became home to the Fort Lyon Colorado Coalition for the Homeless and working with the Bent County Historical Society make sure the Chapel is available for special events and to promote Fort Lyon history. If you would like to know more and / or view the Chapel, please contact Kathleen Tomlin at 719-456-2948, and she will be glad to assist with requests and visitation.